what does science look like?
repetitive actions repeated
the space between
to be repeatable
controlled and recreated
noisy like air
evidence of activity
building a set of rules
intentions and actions
thinking outside thinking
tools for thinking
balancing always balancing
imagined spaces
a space of possibilities
assumed knowledge
presenting evidence
controlled spaces controlled
optimisation is compelling
in stillness and silence
potential for revelation
nano folk-law
tools for the mind and hand
thinking through making
limitations are important
making the invisible visible
created spaces controlled
grasp an understanding
make science
of something dimensionless
defiantly transitional
a block of knowledge
potential for revelation
the ritual of work
interesting not interesting
object making
things that are true
spaces are created
engagement with rules
measuring forces


thinking about possibilities
Posted by new work at 16:07 2 comments: 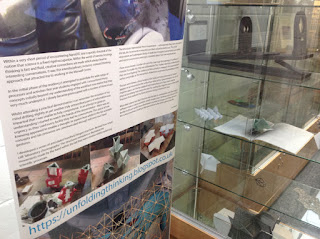 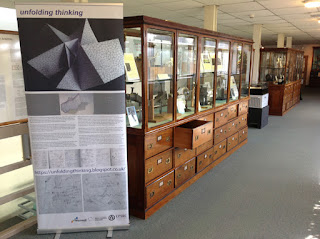 The banners are up and looking good - they provide a contextual explanation for the work on display within the Cavendish Museum. 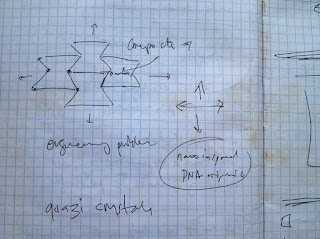 I've been looking at this diagram/sketch in my notebook -
the film is the result of this reflection. The engineering problem of contracting and expanding is fascinating. 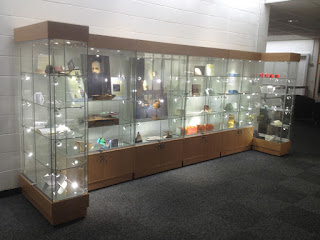 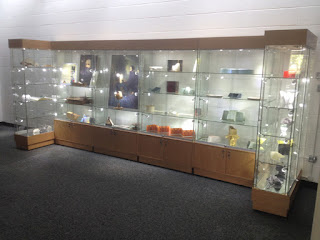 The latest exhibition as part of the residency - a huge presentation case within the Physics Department situated just outside the Cavendish Museum. The work on display is mainly the solid 3D representations of space. In the initial phase of the residency I attempted to assimilate the wide range of processes and activities first year students engaged with. I encountered many concepts initially beyond my understanding of the world but now realise that they very much underpin it. I slowly became preoccupied with a number of these issues. Whilst attending a practical demonstration I can remember the sensation of my mind slightly drifting as yet another truly extraordinary piece of information was imparted but which I was unable to fully comprehend.  In an attempt to grasp an understanding, I started to watch the hands of the demonstrator -  there was an urgency as they used every facility they had to communicate. This space of not knowing appeared to enable a thought, to explore how whilst in the lab scientific concepts and lab processes are communicated through subconscious hand gestures. I developed a series of articulated handheld hinged structures derived from what I call 'laboratory choreography'. The structures mimicked or illustrated the movements made by the hand within the lab that were created whilst explaining scientific processes. The structures represented these movements -  subsequently they were returned to the lab, the movements re-enacted as a form of performative act. This small observation and subsequent body of work has instigated conversation and debate and raised consciousness amongst scientists about how we communicate. I encountered a number of machines that map the topology of surfaces of material. To enable this, they are calibrated to 'fire' matter, electrons, at the material they are investigating. The evidence of this activity is mapped, the space between surface and probe, or the interaction of electrons and material providing answers. The cast work follows a line of enquiry that looks at these phenomena. Science appears to be interested in the surface but what of the space between, the non or negative space, can this be mapped and made physical? I have been making physical something that cannot be seen by casting the negative space of the folding structures that explored the hand gestures, fixing a moment in time.
Posted by new work at 02:00 No comments:

Email ThisBlogThis!Share to TwitterShare to FacebookShare to Pinterest
Labels: 3D, 3D printing, cavendish museum, exhibition, physics, what does art look like?, what does science look like? 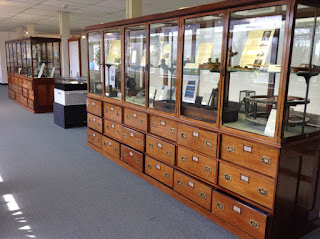 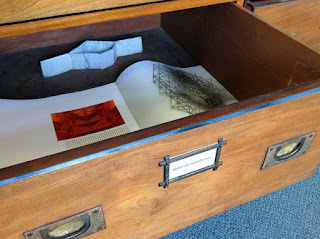 new exhibition within the drawers of Maxwell's Lab cases. The latest exhibition is in the Cavendish Museum in the Physics Department on the West Cambridge site http://www.phy.cam.ac.uk/outreach/museum Thinking about making and making through thinking. For artists, the majority of the work they create is invisible to a public outside their studio. This work often takes the form of sketches, notes and material tests existing in notebooks and discarded objects in the studio on its way to becoming something 'finished'.

The collection of double page spreads in the drawers are a form of visual note book. The pages act as a repository for some of the pieces or 'props' that were created for and used within finished film pieces. The spreads are full of ideas, possible starting points and contain many elements of the finished works - they are in effect a sort 'look book' or 'mood board' of the project.
The idea of revelation is at the core of my history with the book. Here the action has been recreated by literally opening the drawers to reveal the inner space where ideas are stored. The placing of the pieces references the late 19th century practice of displaying objects within cabinets of wonder or curiosity – these are modern versions of the contents of Cabinets of Curiosities.
Much of my work has been about exploring space, the space between and the space of making, the idea of negative space. Within science, words have a particular and specific meaning, but for me I feel I am allowed to play with this idea and the articulated structures are tools that heighten an awareness of the hand movements whilst demonstrating scientific processes. They are starting points to consider actions in space.
The glove box and the laboratory are very specific spaces. That they often protect the specimen within the experiment from us rather than us from it is an intriguing idea. These spaces created to manipulate objects are contained, clean, dry in an attempt to be 'non'.   Within this extraordinary space, specific materials and situations are monitored, ready to be recreated, actions controlled to be repeated. These spaces have their parallel in the art world: the space of the gallery, the white cube where the art is on show, an anonymous space where the art is supposedly the focus. Obviously no space is neutral and each have their meanings, which can be read, but the aspiration to create a static continuum brings to mind the words of Heraclitus 'No man ever steps in the same river twice, for it's not the same river and he's not the same man.'  It appears that science and art are constantly trying to create a time and space where the river is still.
Posted by new work at 04:55 No comments:

Email ThisBlogThis!Share to TwitterShare to FacebookShare to Pinterest
Labels: cambridge, cavendish museum, exhibition, museum, notebooks, physics, what does art look like?, what does science look like? 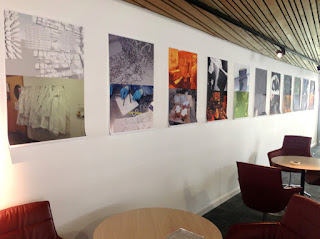 A new exhibition of work created as part of the residency - there are a number of images hanging in the shared area on level 3 of the Maxwell Centre. The images have been made during a residency within NanoTechDTC and start to explore a number of issues; the question of what science looks like, how scientific concepts and lab processes are communicated through subconscious hand gestures whilst in the lab, and mapping the seemingly disregarded by making the unseen visible. The process of working within the labs and engaging with research students has generated a body of new artwork which has been informed by the engagement with nanotechnology. A series of ongoing interventions within the space has generated discussion, presented new possibilities and ways of thinking. The project has recognised similarities, explored possible confluence and developed connections by researching and deconstructing the physical and theoretical concerns of scientists working in the nanotechnology field within the framework of a fine artist practice.
When working within science one is confronted by the phenomena that is the laboratory, it is a completely controlled, managed environment. Every aspect including light levels, moisture content and dust particulates is monitored. Entering through an air shower, wearing head to toe specialist clothes one becomes conscious of one's body; every action is considered and in some way constricted. But the mind is free to wander. Within the laboratory there is the glove box, we have all encountered them in the media. They reference fear and science in the same sentence. Arms are forced into rubber gloves within a sealed box that enables the operator to work with  samples. The space attempts to be a 'non space' that is neutral and repeatable, in which the controlled factors enable the focus of activity to be on the samples, the actual science worked on.
The artist studio is traditionally a space of making and the gallery of displaying conclusions, so the laboratory/gallery correlation is not an exact match, but I started to think about the parallels that these spaces have.

The white box of the gallery is a physical and conceptual space that attempts to enable viewers to see art without restrictions or connections. It's function is to neutralise the materiality of the space, to enable the focus to be on the work, to place art at the centre. For outsiders entering a gallery it must be a similar experience to gallery goers entering a laboratory. The rituals seem obscure and indecipherable and the space unfamiliar, what do you do in here? How do you perform? Is there a right way to do this? 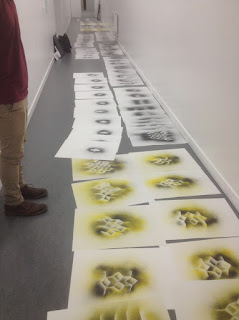 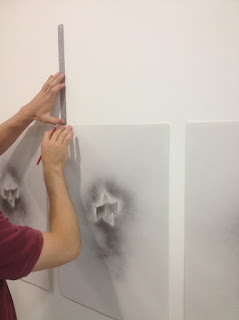 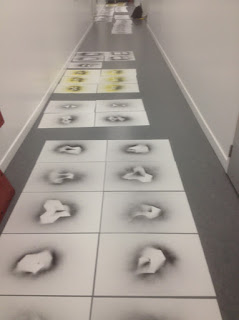 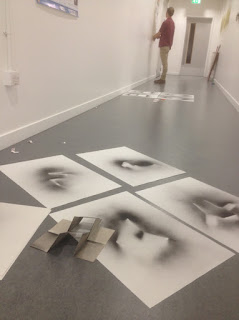 The first major hang of work is up. The work is in the corridors in the Department of Materials Science and Metallurgy building. I am really pleased with how it looks both as work in itself but also how it changes and is changed by the space. The way in which the sequences and groups have been hung start to enable narratives to form in the mind, my favorite moment of the day was watching one scientist explain and then discussing the work with another scientist. A real success. There are a range of approaches to crystallography explored within the body of work from symmetry, stereographic projection to direct phase. A big thanks to Duncan Johnson for helping to make the work of hanging an inspiring and fun experience....

Artist Les Bicknell is in residence at Cambridge NanoTech DTC collaborating with PhD students and academics.

This blog documents the process and the work.

unfolding thinking seeks to extend our understanding between cutting edge science and contemporary art, specifically making connections between nanotechnology and the making of bookworks.

The project will embed an artist within the new Maxwell Centre in Cambridge University working within the labs and making space, engaging with research students to generate a body of new artwork informed by the engagement with nanotechnology.

A series of ongoing interventions within the space will generate creative discussion and enable new possibilities and ways of thinking mirroring the 'blue sky' thinking aims of the Nano Doctoral Training Centre (NanoDTC).

The project will recognise similarities, explore possible confluence and develop connections by researching and deconstructing the physical and theoretical concerns of scientists working in the nanotechnology field within the framework of an artist's practice and creative thinking. The project seeks to build links with the science community, develop audiences for the arts and promote the role of the arts in science, technology, engineering and maths.

Funded by Arts Council England, Maxwell Centre (NanoDTC) and supported by Norwich University of the Arts.